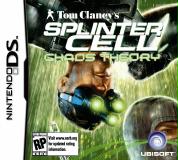 Thet third installment and first Nintendo DS edition of the stealth-action series starring Sam Fisher. Splinter Cell Chaos Theory takes place in 2008, an age where electronic warfare has turned into the greatest threat to world security. As secret agent Sam Fisher, you are tasked with tracking down and eliminating some of the world's most notorious perpetrators of this newest type of warfare, and to eliminate the new threat of global information warfare.