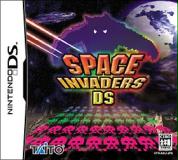 Space Invaders Revolution, as the name suggests, marries the vintage game play of the legendary shoot-'em up with the exciting new possibilities offered by the unique features of the Nintendo DS. With a choice of directional pad or touchscreen and stylus controls, players can steep themselves in the nostalgic wonder of the original, while the New Era mode expands and twists the gameplay, bringing in puzzle elements as well as other new concepts. Taking the form of a 60-level world tour, players must battle waves of invaders in 20 different locations around the globe, eventually taking in a climactic showdown with the UFO mother ship on the moon. Collect power-ups and combine them to form new weapons in order to destroy the invading fleet.