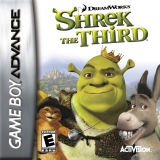 In Shrek the Third, players journey as Shrek and his friends to save Far, Far Away in a twisted fairytale adventure from the movie and beyond. Assuming the roles of Shrek, Puss-in-Boots and newcomer Artie, players journey beyond Far Far Away with the help of Merlin's magic wand. Shrek the Third for the Game Boy Advance closely follows the storyline of the movie as the characters complete great quests that end with them saving Far Far Away from the villainous Prince Charming.