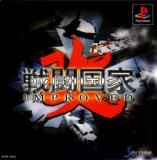 Sentou Kokka: Air Land Battle is the second of three Sentou Kokka military strategy games released on the Japanese PlayStation. Players use advanced military units to wage war on opposing forces in strategic turn-based gameplay on 20 different maps. The game offers a full story mode with polygon-rendered units and terrains and is playable by up to three players. The number of weaponry featured in the game was upped to 170 and there are four different military powers. The game was followed by Global Force: Shin Sentou Kokka and re-released in September 1999 as part of the PlayStation The Best budget line.