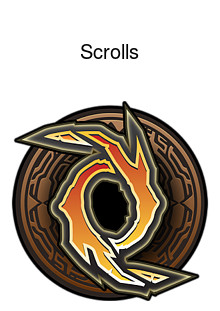 The second game design project from independent game creator Mojang (the creative force behind Minecraft,) Scrolls offers a new and unique game play style where you fight to outmaneuver your opponent on the battlefield using the destructive powers in your collection of magical scrolls. Tear your opponent limb from limb with the might of your summoned armies, lay waste to the defenses with the obliterating power of your siege weapons or open up the very skies and let bolts of lightning shower his minions until only ash remains. The road to victory is yours to choose. Obtain the powerful scrolls and decide which ones you will take to battle as you fight to become the mightiest Magician of all.