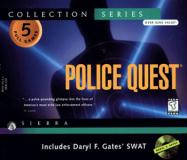 Innocent lives are relying on your ability to learn what it means to be a cop… the laws, the procedures, the weapons… the meaning behind the badge. And now you'll have your chance to prove it with the second Police Quest compilation, Police Quest Collection Series. Featuring five different games, this anthology set boasts the original and enhanced versions of Police Quest: In Pursuit of the Death Angel, the SVGA editions of Police Quest 2: The Vengeance, Police Quest 3: The Kindred, Police Quest: Open Season, and Police Quest: SWAT. In all players can expect to enjoy more than 30 unique missions, an exclusive map editor, three-player Internet play, and an interview with former L.A. Police Chief, Daryl Gates.