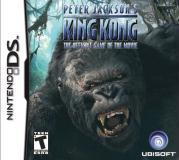 In this epic adventure [loosely based on the gameplay of the console version, with all-new levels and play elements], you will experience the fateful legend of Kong from the perspective of both man and beast. Survive Skull Island as unwitting hero Jack Driscoll in first-person shooting action, and unleash the staggering power of the 25-foot-tall King Kong in third-person action sequences.