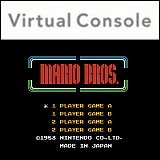 The classic arcade action game that introduced the brothers Mario (who appeared in Donkey Kong as "Jumpman") and Luigi to the world. This single-screen platform game has the duo work against each other to knock out turtles and other enemies to get the most points. In addition to the characters, Mario Bros. also introduced the ability to flip enemies from below and then sending their shells sliding down platforms with a well-placed kick.