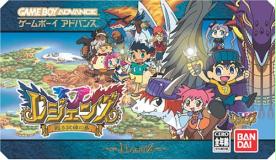 Sequel to Legendz, known as Legendz: Yomigaeru Shiren no Shima, which was only released in Japan. This roleplaying game is based on the manga and anime series Legendz. You attempt to free legendary creatures known as Legendz, who've been sealed away with a substance called "Soul Doll." You now have access to 103 "Legendz" creatures, and must raise them through battle, teaching them new skills along the way. Battles involve you and your pack of Legendz taking on monsters. The game is available in a bundle with a special Soul Doll and Soul Adapter peripheral that, when connected to the Game Boy Advance makes a new Legend appear in the game. Players are able to purchase other Soul Dolls and use them in the game.