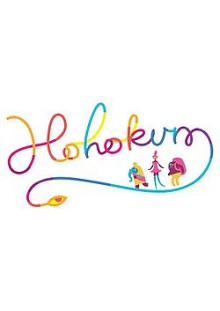 Hohokum is a distinct creative collaboration between artist Richard Hogg and Honeyslug, a London-based game studio. It is a whimsical colorful game with an emphasis on playful exploration and creativity. With the vision to create an experience free of some of the typical pressures of videogames Honeyslug delivers inspiring and unique gameplay in Hohokum.

Players take on the role of a curious flying Technicolor kite-like being. Along their travels through the vibrant world, players will be able to uncover secrets by interacting with elements around them in different ways such as carrying characters to new areas on their back or flying over objects to illuminate them. The world of Hohokum is full of surprise; even running into certain objects can be its own reward as the interaction produces a tune or sounds that add to the level’s music track. From the way a player navigates the world to the various ways characters communicate to the abstract vivid artwork, Hohokum is an expressive and mesmerizing universe. While there are goals, secrets and Trophies discovered along the way, at its heart, Hohokum is a playground — a place to wander about and get lost in.