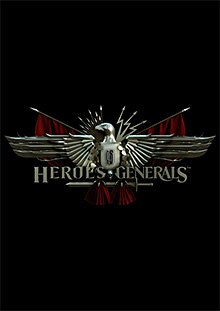 Heroes & Generals is a Free2Play Massive Online FPS with a Strategic Multiplayer Campaign, set in the midst of World War II Europe, where Axis and Allies fight for control.

The game uniquely merges epic first-person shooter action with a rich strategic layer, where your decisions have the power to turn the tide in an ongoing war among thousands of online players.

Players can choose to play as 'Heroes', fighting in the trenches, flying planes, commanding tanks and other vehicles on the battlefield, or take control of the war as 'Generals', determining the strategic direction and supporting fellow players by managing battlefield assets, army units and reinforcements.

Heroes & Generals delivers a full blown first-person shooter experience, complete with intense infantry and vehicle combat in a wide variety of modes and missions, fought on behalf of the Axis or Allies. As your customizable character advances in rank, you might join a small squad of elite soldiers operating behind enemy lines, or fall-in with a larger section fighting an epic battle for a strategic bridgehead. As these battles are waged, resources and global strategies are managed on a tactical overview map linked to the game's innovative War Server. Here, players who choose to be strategic officers will have the entire map at their disposal and can decide how to manage battlefield assets and where to push the attack