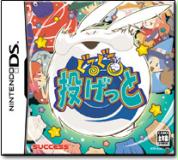 Comical action game from BeeWorks and Success. Players take control of Straw, an apprentice witch. As you work your way through the game's 2D stages, you make use of "Mono," a white-colored, three-tiered character who can apparently understand human beings.Mono substitutes for a ball in the game, and you work your way through the stages by throwing him around. Using the stylus, you draw circles on the bottom screen in order to build up energy and toss Mono further. Apparently, building up strength is similar to how one builds up power in a golf game; your goal is to build up enough strength so a bar on the left side of the screen ends up in a small target zone. You'll have to work your way through eight stages by tossing Mono here and there.