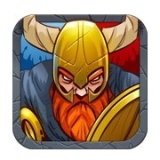 In Godsrule, players are in charge of leading their fierce armies into battle, as well as managing their empire. To prevail over competitors, players must dominate contested territories, collect scarce resources, expand their land, and slay their enemies with powerful units and magnificent spells. After choosing between two rival factions, players create their own clans and battle for contested territories, each holding valuable rewards and the true taste of sweet victory.

Set in a lush fantasy world, Godsrule mixes social gameplay with established RTS elements to create a unique cross-platform experience. The game allows players to experience the same persistent world via browser and the iPad. This allows them to team up with their friends in battle, train units and manage their empire from anywhere at any time.