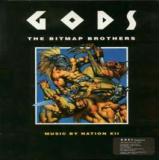 In a city torn apart by years of war and destruction, there is the opportunity for one brave warrior to gain what humans have always sought: immortality. In GODS, you play the role of Hercules, the only gladiator capable of taking on what the City of the Gods has to offer. If you should defeat whatever they throw your way, you will become immortal and permanently reside in the City of the Gods. Through 12 unique worlds, your courage and strength will be put to the test by hordes of unspeakable evil and brutal beasts that have been sent to see that you do not succeed. You'll have 15 weapons and 20 potions at your disposal, but you'll also have to use your wits to solve puzzles and outsmart your foes in order to advance. If you think you have the intellect, will, and strength to live among the Gods, then GODS is the spirited game for you.