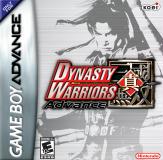 The long-running Dynasty Warriors series makes its debut on the Game Boy Advance SP. Players choose from 13 characters from Chinese history, then develop their skills and outfit them with hundreds of different weapons as they battle and brawl their way through 180 challenging battle maps. Players build up their strength to unleash an awesome Musou attack and lead their kingdom to victory.

Dynasty Warriors is one of Japan's most popular game series, with each main entry on the PlayStation 2 passing the million sold mark.