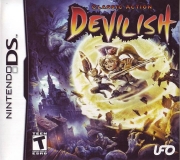 Demons have invaded great Tombeau. The darkness of desperation is drowning your kingdom in shadow. The time has come to save your beloved kingdom once more...

This fantasy game (inspired by the classic Breakout) has you battling opposing forces with your bouncing ball. Hit the ball back and don't let it fall off the screen, and aim for the goal within the time limit to win. You can move the bar around on the screen to bounce the ball back to keep it in play, and you can use a special power to rotate the bar for special attack angles as well as collect power ups for greater victory. Each world is made up of varying numbers of stages. The last stage in each world is controlled by a monster - defeat it to conquer that world!