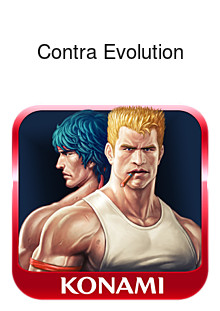 Contra: Evolution brings all of the run-and-gun action of the 1988 original to mobile systems, with 21st century graphics and controls to the palm of your hands. Keeping with the legacy of the original Contra game, Contra: Evolution takes players through the jungles of South America to stop an alien conspiracy for world domination.

Play as one of four characters, all with their own unique strengths, as you take on wave after wave of gun-toting terrorists and save the world. Contra: Evolution combines all of the best parts of the original Contra game that players remember with mechanics designed for a modern audience, from level design that captures Contra’s famed difficulty to reimagined graphics inspired by the classic 8-bit art. Whether you’re a lifelong fan or taking on the jungle for the first time, you’ll have a hard time putting Contra: Evolution down!