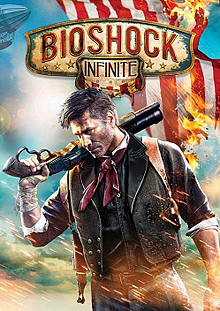 In BioShock Infinite players assume the role of former Pinkerton agent Booker DeWitt, sent to the flying city of Columbia on a rescue mission. His target? Elizabeth, imprisoned since childhood. During their daring escape, Booker and Elizabeth form a powerful bond - one that lets Booker augment his own abilities with her world-altering control over the environment. Together, they fight from high-speed Sky-Lines, in the streets and houses of Columbia, on giant zeppelins, and in the clouds, all while learning to harness an expanding arsenal of weapons and abilities.

The city of Columbia was built by the US Government in the late 1800s to serve as a floating world’s fair. The city was sent to travel from continent to continent and show the rest of the world the success of the American experiment. Unknown to most, Columbia was also a “death star,” secretly packed with weaponry. Political strife caused Columbia to secede from America and the city disappeared. No one knows how to get to Columbia.