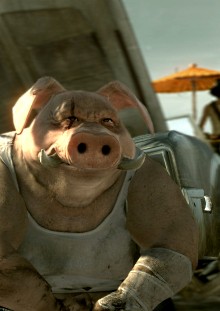 RP-T+ for Rating Pending, Targeting a Rating of Teen or Above:

Designed by Michel Ancel and his acclaimed design team at Ubisoft, this is a sequel to the beloved adventure game, Beyond Good & Evil.

The game has not yet, however, been officially announced under the title "Beyond Good & Evil 2" - it is instead referred to simply as "Next Michel Ancel Project" after its creator, it it might possibly have a unique title to reboot the franchise.

NOTE: This game has been confirmed as a title in production, but it has not been announced for any given platform - it may or may not be released on this system. Please check back for official info.