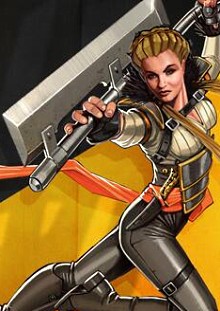 The short peace that followed gave birth to the Pansophic Revolution - a golden age of industrial manufacturing and design. As technology advanced, old tensions reignited and soon the world faced the scourge of war once more. Fueled by technological Pansophic advancements, the face of warfare has changed. All disagreements are settled head-on by elite teams of chosen warriors from all over the world, with each member specialising in either high-tech ranged gadgetry or sophisticated melee weapons. Trained and bred for battle, they meet each other in sanctioned WarZones to face off for their share of glory.

Choose your side from the powerful Royal Marines, the courageous Cossacks and more as they come online, then build and progress your chosen warrior by earning iron and advancing through the ranks. Each rank unlocks new abilities and effects, allowing deep strategic builds for your Warrior on every Level. Select from classes like: the Enforcer, who wields a massive sword and transformative shield to inflict and absorb damage; the Tech Archer who unleashes a maelstrom of arrows from afar; or the Duelist, using blinding speed and stealth abilities to pick off unsuspecting enemies in isolation.